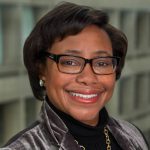 Paula T. Hammond is Institute Professor at the Massachusetts Institute of Technology and the Head of the Department of Chemical Engineering. She is a member of MIT’s Koch Institute for Integrative Cancer Research, the MIT Energy Initiative, and a founding member of the MIT Institute for Soldier Nanotechnology. The core of her work is the use of electrostatics and other complementary interactions to generate functional materials with highly controlled architecture. Her research in nanomedicine encompasses the development of new biomaterials to enable drug delivery from surfaces with spatio-temporal control. She also investigates novel responsive polymer architectures for targeted nanoparticle drug and gene delivery, and has developed self-assembled materials systems for electrochemical energy devices.

Professor Paula Hammond was elected into the National Academy of Science in 2019, the National Academy of Engineering in 2017, the National Academy of Medicine in 2016, and American Academy of Arts and Sciences in 2013.   She is one of only 25 distinguished scientists elected to all three national academies.  She won the ACS Award in Applied Polymer Science in 2018, and she is also the recipient of the 2013 AIChE Charles M. A. Stine Award, which is bestowed annually to a leading researcher in recognition of outstanding contributions to the field of materials science and engineering, and the 2014 AIChE Alpha Chi Sigma Award for Chemical Engineering Research.   She was selected to receive the Department of Defense Ovarian Cancer Teal Innovator Award in 2013, which supports a single visionary individual from any field principally outside of ovarian cancer to focus his/her creativity, innovation, and leadership on ovarian cancer research. By developing degradable electrostatically assembled layer-by-layer (LbL) thin films that enable temporal and even sequential controlled release from surfaces, Paula Hammond pioneered a new and rapidly growing area of multicomponent surface delivery of therapeutics that impacts biomedical implants, tissue engineering and nanomedicine.  A key contribution is her ability to introduce not only controlled release of sensitive biologics, but her recent advances in actually staging the release of these drugs to attain synergistically timed combination therapies. She has designed multilayered nanoparticles to deliver a synergistic combination of siRNA or inhibitors with chemotherapy drugs in a staged manner to tumors, leading to significant decreases in tumor growth and a great lowering of toxicity. The newest developments from her lab offer a promising approach to messenger RNA (mRNA) delivery, in which she creates pre-complexes of mRNA with its capping protein and synthesized optimized cationic polypeptides structures for the co-complexation and stabilization of the nucleic acid-protein system to gain up to 80-fold increases in mRNA translation efficiency, opening potential for vaccines and immunotherapies.  Professor Hammond has published over 320 papers, and over 20 patent applications.  She is the co-founder and member of the Scientific Advisory Board of LayerBio, Inc. and a member of the Scientific Advisory Board of Moderna Therapeutics.

Elected to the National Academy of Sciences, 2019

Elected to the National Academy of Engineering, 2017

Elected to the National Academy of Medicine, 2016

Elected Fellow of the American Academy of Arts and Sciences, 2013